A basic tutorial on crimping.

Note that I've pushed the wire all the way into the crimp, up to the stop.

Now, put the crimp into the color coded slot, and crush down on the crimp as hard as you can. No, harder [;)]

A second hard crimp at the back end to close off the insulation part.

The finished crimp. You shouldn't be able to remove the wire without re-crushing the connector.

Anybody have thoughts on proper use of crimpers with one side having a 'point'? See bad drawing below. When you look at the barrel of a connector, it always has a point where the metal comes together. With my crimper, I put the crush side over that side and the point on the back side, which is solid. My thoughts are that if I used the pointed part on the side that is split, I could just further separate the barrel and make a bad connection.

Originally posted by Divinar
I put the point where the two parts come together - that's where I want everything crushed together. But my point isn't sharp, it's rounded.

The part of your crimp tool with the point is often for connectors with no insulation.

And if you use to small a wire in a large connector the the crimper will not squish it enough and the wire will pull out.


I won't go into reposting what has already been said about connectors and sizes and types. That is covered in here http://www.modifiedpowerwheels.com/foru ... IC_ID=3264" onclick="window.open(this.href);return false;
I will add a little more about types of crimpers I used to work as an electronic tech and all the electronic guys and electricians I knew said the same thing. There is only one type of crimper worth using and its the Klien crimper. After I used one once I never used any other type again. There are copies made by crescent and other manufactures but Klien is well know and liked amongst electricians.

The first photo shows the standard generic combo-striper/crimper on the left, then the klien crimper, then a klien stripper. Strippers are of course personal preference, I like mine tall and skinny top heavy with blond hair. Opps wrong thread. I like the klien on the right. Some like automatic ones it all your own preference just buy a good brand that uses quality materials it will last a long time and work well.

If you do much with crimping and stripping wires its worth the 40 bucks to buy a good crimper and stripper.

Almost forgot there are ratcheting crimpers that are technically the best crimpers but they are outrageously priced for name brands and we don't need mil-spec crimps so its not worth talking bout them.

yup about time I got one of those. is the channel lock version just as goood

I haven't used the Channel Lock brand but I have used some of their other tools and they held up well. I know they do make some crimpers and last time I looked at them they were made in the USA so they are probably a safe bet. They are a bit cheaper than the Klien as I recall, I know Irwin/Vice Grip makes some also but I am not sure if they are made in the USA or not. That is a big deal to me simply because they use better steel in American tools.

I will admit I am a tool snob and I also like to stay with one brand when it has served me well over time. So even though the Klien is a bit more expensive I will go with them because I have used them for years.

I have the ratcheting crimper. It was $80 but I can do anything with it. I use it at work so it was worth the $ to me.

here are the ratching crimpers that I talked about

It comes with 5 adapters to crimp just about anything. It provides very tight crimps. If you do wire work on a regular basis, it's well worth having.


They are Blue Point. I think they were about $8 off the Snap-on truck. Self adjusting..one squeeze, automatic. Great in tight spots. (I'm Still talking TOOLS![:0]) You appreciate these when you have no room to pull on the generic crimper without yanking the wires out of something.

But a pair of pliers will open the throat a bit:

Now the wire lays snugly in the connector:

I didn't take a picture after I crimped the connector closed. It wasn't tight enough to hold, but it did fit more snugly [V]

After soldering, it's a single, solid mass.

So after scraping off the extra solder, I covered it with a piece of shrink wrap, and attached it to the Grape Gaucho's motor:

Now, let's look at a ring terminal that could have just been crimped:

It would have fit, just like the previous one. But where's the fun in that?

First, we remove the yellow insulation and toss it:

Then, insert the wire into the terminal:

I used a vice for this so I could take pictures - it actually made things harder, as it behaved like a big heat sink, and made soldering take much longer [B)]

I held the iron on the join, and pushed the solder at the end of the wire - NOT THE IRON ITSELF. [/size=3]When the copper wire got hot enough, the solder suddenly flowed all around and through the wire and crimp like water!

And again, scraped clean, covered in heat shrink, and installed in the Grape Gaucho:

Thanks Divinar, this is a great tutorial.
The only thing I would add is that if you're going to be doing a lot of soldering, I found the Helping Hands tool invaluable.
There are different kinds out there, ranging in price from around $10 to upwards of $50, depeding on the options it has and what it's packaged with. Most have the 2 clamps and a magnifying glass, some have a sponge in the base for cleaning, and some have a holder for a soldering iron. I got mine at Radio Shack for $16 or so. I found the magnifying glass usually got in my way, so I took it off, but I do like the sponge and holder features.

This is the Radio Shack version. This isn't a good photo of it, since the components are not set up in the correct way.

And here are some other versions out there http://www.harborfreight.com/jumbo-help ... 65779.html
Unfortunately, I got one from eBay for a bit more before I knew I had a local Harbor Freight store.
New Soldering Parts Holder Hobby Vise Helping Hands - $10.94 shipped 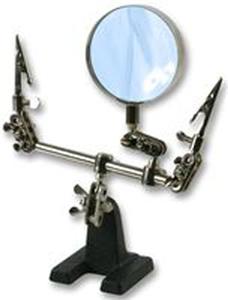