This is a tutorial section. find out how motors, relays, flashers, LED's work.
DO NOT POST HERE, UNLESS ITS A TUTORIAL
Locked
1 post • Page 1 of 1

This is an introduction to how an electromechanical relay works, and why they're a modder's friend.
(This does not cover solid state relays. You can find out about those here.

Introduction:
A relay is nothing more than a switch, operated by a magnet. A typical relay like we use here (this is a SPDT type), has three main parts - the contacts, a coil, and an armature. It may or may not have an additional spring which is used to help pull the armature back to the open position when the coil is de-energized. The relay shown here just uses the memory of the bend in the metal as a spring.

The coil is an electromagnet. A core made of iron with copper wire wound tightly around it. When current flows around the iron and through the wire, it creates a magnetic field. This attracts the armature toward the coil and 'flips the switch' inside the relay.

The armature is the only part that moves. It is connected to '30' on one end, and has contacts on the other end. These contacts move between 87 and 87a, depending if the coil is on or off.

Operation
To make a relay function, you need to supply power to the coil. Poles 85 and 86 are the connections you need. On most relays, it makes no difference which one is positive or negative.

Does your relay have a suppression circuit? Check the drawing. Most relays will have a schematic of the insides printed right on the housing.

The triangle pointing upward with a line on top next to the coil depicts the internal diode
diagram.png (36.52 KiB) Viewed 17211 times

There are some relays with internal suppression circuits. The suppression circuit is generally a resistor or a diode parallel to the relay coil. The relays with a diode suppressor will have polarity sensitive coil connections. This means that the proper relay coil terminal (the positive terminal) must have the positive voltage applied to it. If the relay is connected improperly, the relay may be damaged or in some cases it simply won't operate.
The diode comes into play when the power source is removed from the relay coil. When power is applied to the relay coil, a magnetic field is created and energy is stored in the coil. When power is removed, the magnetic field collapses causing a reverse voltage to be generated (it's called inductive kickback or back EMF). This is generally only a concern when working with LOGIC devices. (Not going to affect your headlights)

The other connections on the relay are up to you and your application. That's what makes them so versatile. You can have one input and two outputs, or two inputs and one output (or more or less depending on your relay)

Here are three nifty diagrams courtesy of jparthum:
(click each image to animate)

This first one demonstrates how a relay can be used to switch high current (such as a motor) using a low current signal. 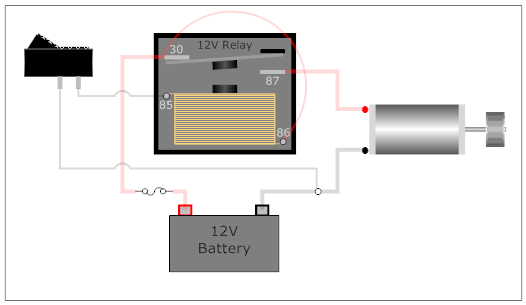 Here, we see the relay controlling two outputs - when the relay is open, it powers two LEDs. When the coil is powered and the contacts close, it powers the motor. 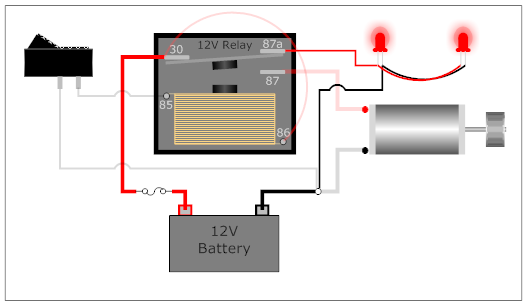 The third diagram shows how a relay can be used with two 'inputs' and a single 'output' being used to drive a motor, and then auto-brake when the switch is released. 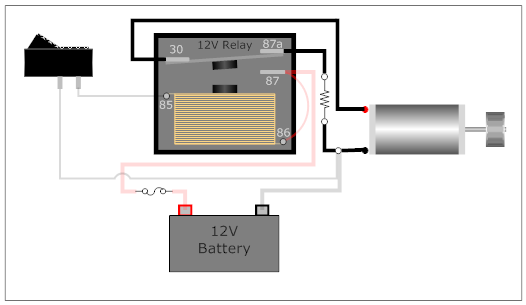 
Types and Configurations
Relays come in several configurations and types with different numbers of poles, throws, amperage ratings, and coil voltages. I would go through the different variations of poles and throws and try to explain them, but Wikipedia did such a wonderful job with a general list, I'll just copy/paste it and give credit where credit is due:

The following designations are commonly encountered:

The "S" or "D" may be replaced with a number, indicating multiple switches connected to a single actuator. For example 4PDT indicates a four pole double throw relay (with 14 terminals).

Make sure you select a relay with a high enough amperage rating for your application. Most automotive style relays are rated between 30-40 amps which is usually high enough for our Power Wheel applications.
In addition, pay attention to the coil voltage. This is the voltage at which the coil will energize enough to close the relay. Common voltage ratings are 6v, 12v, and 24v.

Typical Applications in MPW
We generally use relays here to switch a high-current load with a low-current signal. Usual applications where you would find a relay are in keyed ignition, remote kill set-ups and NOS/Turbo buttons. Some advanced modders here have come up with ways to take the high-current load off the shifter and throttle switches using relays. This prolongs the life of the switches and increases the overall reliability.

One of the main benefits of using a relay is being able to use a small, inexpensive switch, or even a remote control unit to perform high-current switching or multiple switching functions. For example, the output of one relay can be used to energize the coil of another relay, creating an automatic switch.

Anyone have a diagram they feel should be included, send me a message!

Return to “'How Stuff Works'”